I love music. I love that it can change my attitude and refocus me so quickly. Christmas music is no different for me. I love it all: from Rudolph and Frosty, White Christmas, and Have Yourself a Merry Little Christmas to songs and carols with deep, soul-touching lyrics; songs that remind me of singing in choirs throughout the years, songs I remember from childhood, songs that make me remember those I loved who are no longer here; songs that have the power to bring me to tears as I realize my need for a Savior, His amazing grace, and His love for me.

Here are some of the albums I have been playing on Amazon Music this month. (I have included Spotify links below, but most of these albums are available widely.)

Disclaimer: This list is not exhaustive and you should put it through your own theological vetting process. (I may not be as reformed as some in my musical selections. 😉)

Waiting Songs by Rain for Roots

Majesty & Glory of Christmas (Warning: If you have sung in choirs you will have a hard time not singing along. Your children may make fun of you!)

Prepare Him Room by Sovereign Grace

Heaven Has Come by Sovereign Grace

The Manger by Anne Wilson (Because I can’t help myself, I do still love country music!)

May music help you rest more deeply this Christmas season in God’s love for you and the joy He brings. Merry Christmas!

Each Friday, I’ll post links to 3–5 resources from around the web you may want to check out.

Why Do Christians Make Such a Big Deal about Sex?

This article is a good primer on what the Bible has to say about sex and marriage.

Whenever people ask me why Christians are so weird about sex, I first point out that we’re weirder than they think. The fundamental reason why Christians believe that sex belongs only in the permanent bond of male-female marriage is because of the metaphor of Jesus’s love for his church. It’s a love in which two become one flesh. It is a love that connects across sameness and radical difference: the sameness of our shared humanity and the radical difference of Jesus from us. It’s a love in which husbands are called not to exploit, abuse, or abandon their wives, but to love and sacrifice for them, as Jesus did for us.

The 25th anniversary of the death of Christian singer/songwriter Rich Mullins happened recently, and Lisa LaGeorge reflected on why his music means so much to her.

Rich was a friend, or at least, his music was. Ministry in Alaska was lonely at times, cold and dark. Rich was a click away on the Discman, making observations, asking questions, confessing, and declaring the love of the Savior of a ragamuffin people. I needed the reminders–often. I still do.

Ligonier Ministries has developed a new resource called Ligonier Guides. These look like helpful essays on a variety of theological (and other) topics.

For those looking for clear and succinct biblical and theological teaching, Ligonier Ministries has developed a new resource: Ligonier guides. These guides, covering topics such as theology, worldview and culture, biblical studies, Christian living, and church history, provide overviews and explanations from Ligonier’s topic index, along with quotes and links to additional topics and resources.

Each Friday, I’ll post links to 3–5 resources from around the web you may want to check out.

I suspect I’m not alone in having a strong association of Advent and Christmas with music. Just in time for the season, Brett McCracken shares his favorite Advent albums of the last decade. There are links to stream the albums; you might just find yourself a nice soundtrack for the next three weeks.

I’ve been encouraged, for example, that in the last few decades there has been a renaissance of Advent–focused Christmas music: music that is theologically rich and, while still joyful, somewhat more somber and serious than pop Christmas radio. This music helps listeners enter into the Advent story in a way that focuses on spiritual contemplation more than tinsel-drenched merriment.

You Can Be Anxious About Nothing

The command from Paul in Philippians to be “anxious about nothing”—well, it can’t really mean nothing, can it? It sometimes feels like stress and anxiety are simply a part of the human experience. Kim Cash Tate wrestles with this command in an article over at Desiring God.

Alternatively, we tell ourselves that “do not be anxious about anything” is for the spiritually mature saint, a verse to aspire to. And since we’re not there yet, we can dismiss this direct command for a while. Moreover, we’re careful not to burden others with it. If a fellow believer is battling anxious thoughts, we think it insensitive to bring this verse to bear on the situation. Better to show sympathy than to risk sounding trite.

How Can Jesus Be Our Everlasting Father?

Another article here that is Advent-adjacent. David Sunday helps us think about the title “Everlasting Father” for the Messiah in Isaiah 9.

Of all the names attributed to Jesus in Isaiah 9:6, Everlasting Father intrigues me the most because it’s the one I understand the least. How can Jesus the Messiah, the second person of the Godhead, be called Everlasting Father?

On the WPCA Blog This Week

This week on the blog we published an article I wrote called Jesus Did Not Come to Bring Peace on Earth. If you haven’t already seen it, check it out!

Each Friday, I’ll post links to 3–5 resources from around the web you may want to check out. (I’m much shorter on time this week, so please bear with the more abbreviated introductions to the links. Thanks!)

A Meditation on Strength and Weakness

Does God prefer weakness or strength? What does the Bible say? Kevin DeYoung points us in some helpful directions.

As Christians we know that weakness is good. But then, the Bible isn’t always down on strength either. So which is it? Should we try to grow, to mature, and to fan into flame the gifts we’ve been given? Or should we boast in all our limitations and failures?

A Playlist of Songs for Lent

At The Rabbit Room, Drew Miller and other writers offer songs for listening during Lent. At this link, you can find a brief thought on each song as well as a link to the playlist on Spotify.

This episode of The Gospel Coalition’s podcast is a conversation between Don Carson, Matt Smethurst, and Rebecca McLaughlin. They discuss the difference between being ready to evangelize and feeling ready. (It’s only about 16 minutes long.) 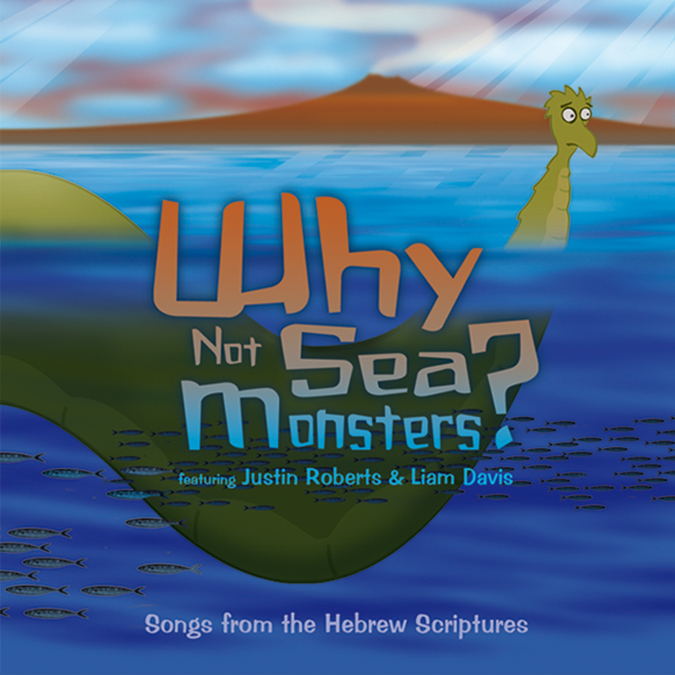 Yesterday I cried at a kids’ song. We were in the car going to visit my parents, and somewhere along Route 519, this song that I’ve heard a dozen times overwhelmed me.

The song was “Nothing Much in Tarshish” from the album Why Not Sea Monsters?: Songs from the Hebrew Scriptures by Justin Roberts, a collection of charming and inventive, if not always strictly accurate, musical retellings of Bible stories. This one recounts the story of Jonah, the Israelite prophet, who “on the way to Tarshish, got swallowed by a large fish.” Roberts sings that

There’s so much biblical truth compressed into these lines. Jonah was indeed in the dark and cold. When Jonah prayed from the belly of the fish, he described the waves closing over him like bars and (particularly revolting to me) seaweed wrapping around his head (Jonah 2:5). Beyond this literal darkness, Jonah was in the darkness of his own sin and outright rebellion against God. God had sent Jonah to prophesy to Nineveh, but Jonah instead took a ship to Tarshish. He intended to flee “away from the presence of the Lord” (Jonah 1:3). For those like me without a strong grasp on ancient geography, here’s a useful map. Tarshish is in Spain, much further away from Jonah’s home than Nineveh, in the opposite direction, across the entire Mediterranean Sea. Had Jonah followed God’s command, he wouldn’t even have been on the sea, but now due to his sin he was trapped beneath it.

It is out of this drowning darkness that God rescued Jonah into the belly of the fish. Jonah prayed, “When my life was fainting away, I remembered the Lord, and my prayer came to you, into your holy temple. Those who pay regard to vain idols forsake their hope of steadfast love” (Jonah 2:7-8). Jonah recognized that he had not successfully fled God’s presence; God was at work in the storm, in the sea, and in the fish. God pursued Jonah through his rebellion. Jonah described this relentless pursuit as “steadfast love.” This is God’s covenant love at work!

Now, the fish, arguably, was still dark. We’re told Jonah was in the belly of the fish three days and three nights before he prayed (Jonah 1:17). Like Jonah, we can be stubborn, stiff-necked people. We may suffer under God’s discipline for a time, but as the song says, “God is in the fish!” His purpose is always to pursue his people with covenant love, to bring us to repentance, and to show us that he is our only salvation. It took three days in the dark, but Jonah learned: “But I with the voice of thanksgiving will sacrifice to you; what I have vowed I will pay. Salvation belongs to the Lord!” (Jonah 2:9).

Jonah was not the only one in the dark in this story. Roberts sings about “lonely Nineveh.” “Lonely” is not the word Jonah would have used to describe the thriving capital city of the brutal Assyrian empire. He might have used “wicked” or “godless” or “irredeemable.” God described them differently. “And should not I pity Nineveh, that great city, in which there are more than 120,000 persons who do not know their right hand from their left, and also much cattle?” (Jonah 4:11). The city was utterly ignorant of God—true darkness indeed. Jonah hated them for their wickedness, but God pitied them. God had no covenant relationship with Nineveh, no reason to offer them repentance. Sin doesn’t deserve a second chance; God could have rained brimstone on Nineveh and remained just. But in his infinite mercy, he sent Jonah, and, after the least inspiring sermon ever, “the people of Nineveh believed God” (Jonah 3:5), and God relented.

The book of Jonah foretells the vast scope of Christ’s work on the cross. It reaches the ignorant and pitiable, the backsliding and hypocritical, the rebellious and hateful. It reaches those that God has no business saving.

This is why I cried as the fence posts passed by on Route 519. God loved Jonah in his sin with relentless, pursuing covenant love. God loved Nineveh in their utterly lost state with mercy even for those who were not yet his people. If God can love Jonah, and God can love Nineveh, God can certainly love me and you.

What a beautiful truth to sing to our children and to our own hearts—that we will sin, and run away from God, and God will discipline us, but God is in the fish. His steadfast love pursues us through the dark.